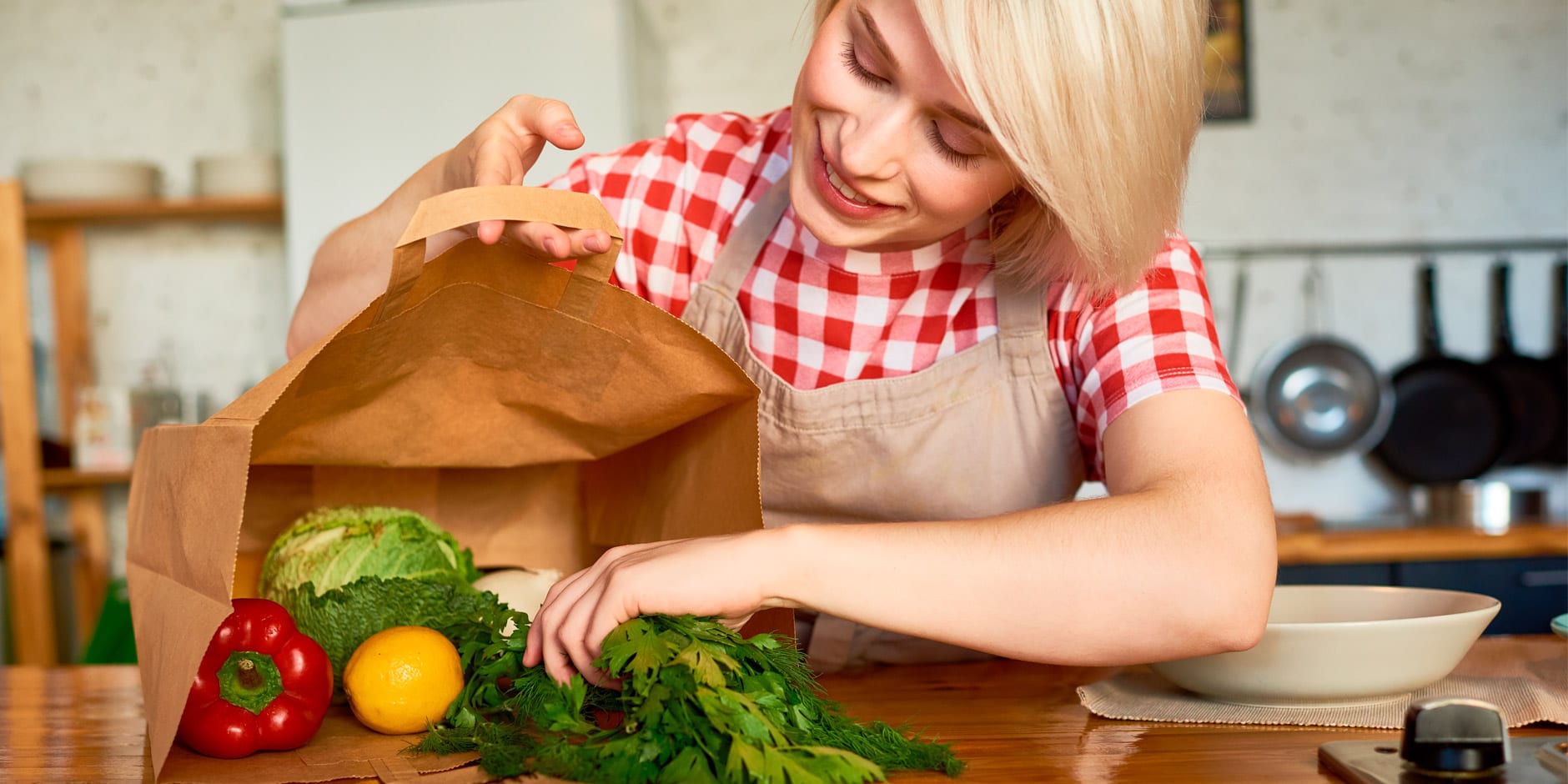 “Hey Google, ask Fred Meyer to add 4 SpaghettiOs to my cart.” Google Assistant chimes in to confirm: “SpaghettiOs, added to your Fred Meyer cart, anything else?”
Sound familiar? Maybe not yet…Kroger, the parent company of Fred Meyer, only recently launched voice-assistant ordering with Google Assistant. Amazon’s Whole Foods stores were first on the scene in early Fall last year, with the introduction of Alexa-enabled voice ordering for Prime customers ordering groceries from Whole Food Market. Walmart and Target have also begun leveraging home assistants.
With Alexa, Google, and Siri becoming more involved in our grocery shopping experience, what role might print, specifically direct mail, have in an Artificial Intelligence-influenced world? We can’t predict what the future holds…but we do see some opportunities to tie this technology with traditional media, like direct mail. But first, let’s explore the consumers in our coverage area – their relationship with home assistants and their relationship with direct mail.

As of September 2018, 57.8 million adults in the United States own at least one smart speaker. This translates to 23% of the adult population in the U.S. and growth is not slowing down anytime soon. For grocery stores who have rolled out voice assistant ordering, this is great news. We were curious to find out what the breakdown looks like in the Mspark coverage area, so we pulled recent consumer survey data from Prosperto find out, by age group, who was using what. Both Amazon Alexa and Google are popular choices for all age groups, but specifically millennials in the 25-34 age bracket. 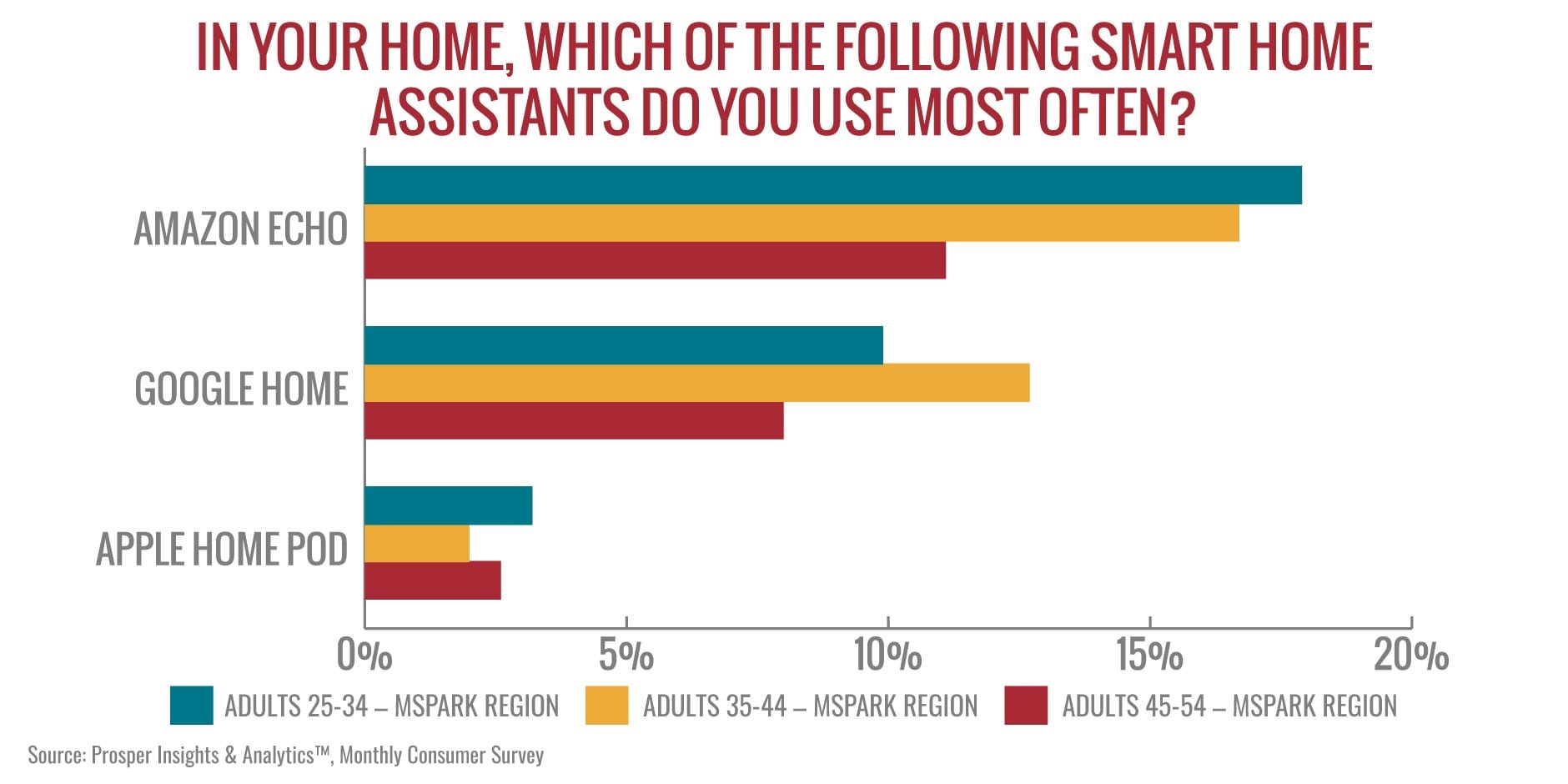 As far as frequency of use goes, older millennials and younger gen-xers in the 35-44 age bracket use their home assistant a bit more often than their younger millennial counterparts. So for grocery stores like Kroger and those under the Kroger umbrella who have partnered with Google Home, there may be some opportunities to go after shoppers in Mspark’s coverage area that are 35-44 – because they are more likely to use Google Home and they are more liley to use their assistant more often. 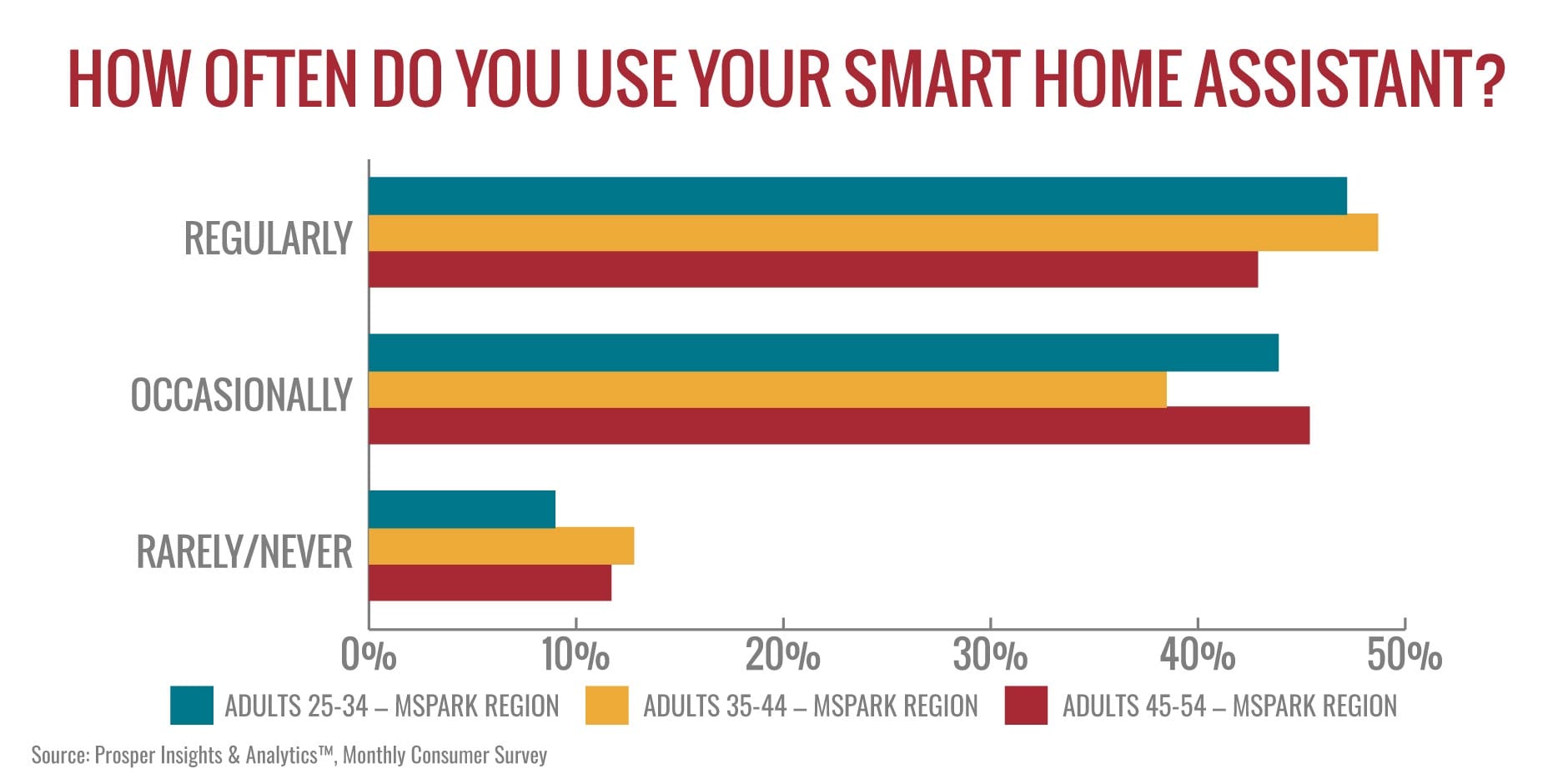 AI is becoming more and more a part of everyday life for many Americans – just think of how it’s involved in daily life through predictive Google searches, product recommendations on retailer’s websites, navigation apps and even spam filters. As marketers it’s easy to get caught up in the tech and overlook the ways in which traditional media, like direct mail, is still very much a part of the shopping experience – even now.

For all age groups, coupons have the biggest influence on grocery purchases. A simple direct mail ad tops the list as well. 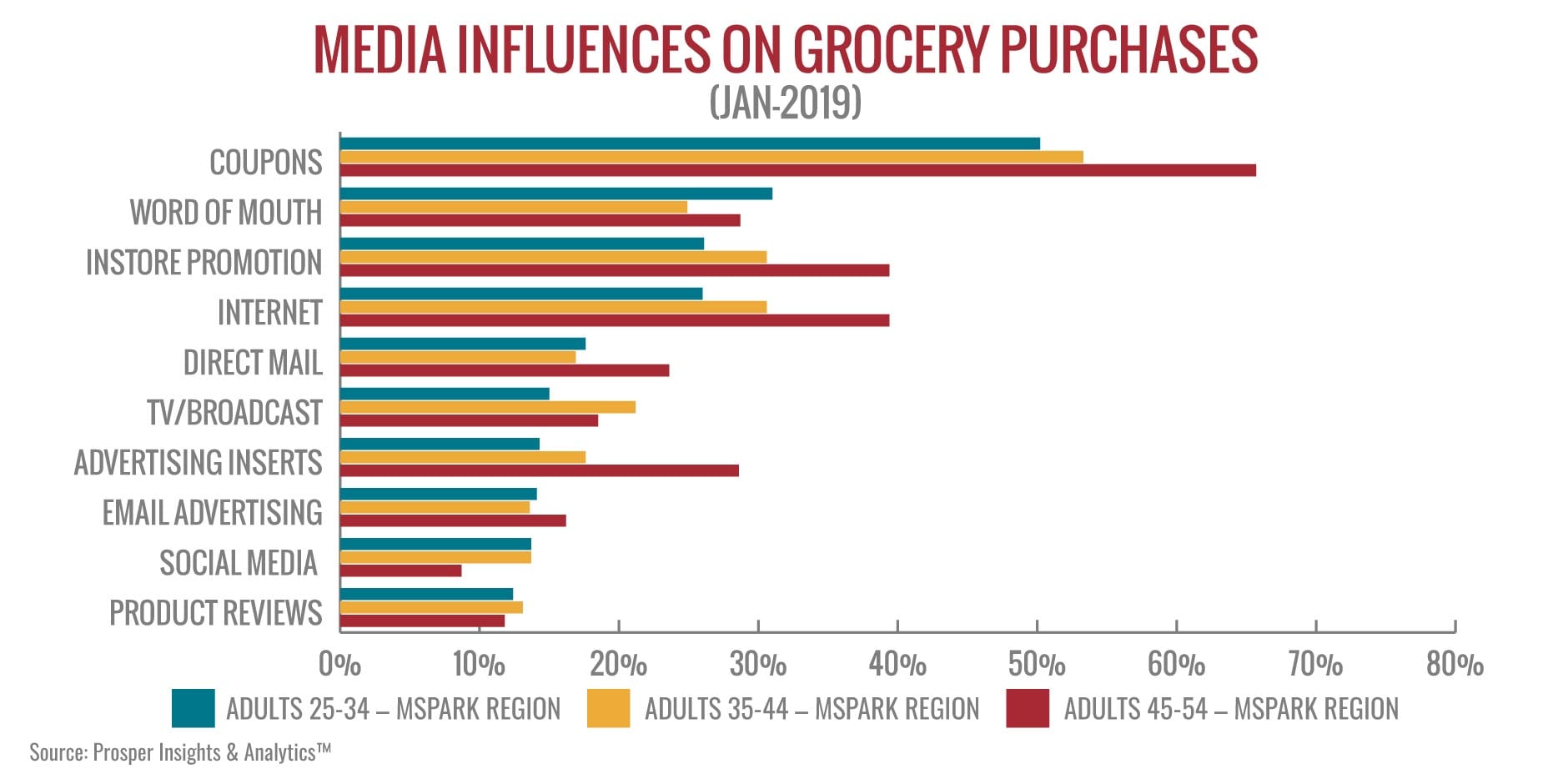 Don’t let the chart deceive you that younger shoppers are less likely to be influenced by coupons and direct mail. More than likely what’s happening is that advertisers are not targeting them with mail as aggressively as their older consumers due to misconceptions that millennials do not respond to marketing mail. In fact, according to the Postal Service’s Household Diary Study, increasing age, along with higher education and income levels, are traditionally correlated with great household mail volumes – which mean millennials are getting less mail overall, including marketing mail. But the truth is that millennials are very responsive to marketing mail. 62% of millennials said they had visited a store in the past month based on information received in the mail, compared to 55% of generation x and 52% of boomers.
With numbers like these, it is no wonder why the ANA/DMA reported in 2018 that direct mail response rates were nearly double what they were for the previous year and the highest they have ever been since they began tracking response rates in 2003.

Tying it All Together

One of the great things about home assistants is that you can eliminate the amount of screen time needed to perform tasks – a luxury in this day and age. For marketers, less screen time means less opportunity to visually appeal to consumers. Fewer trips down the grocery aisles, means less opportunity to see, feel, and experience a brand in its many forms. Delivering something through the mail is opportunity that provides a piece of the visual and tactile connection with the store brand. Not to mention that it’s highly responsive media that could easily trigger shopping behavior. Imagine what could happen if shoppers are sorting their mail next to their home assistant and see an ad that leads them to a voice command. The possibilities are endless, and we are only at the beginning of this major technology adoption phase. To see what we have done in the past working with grocery stores, check out these success stories: 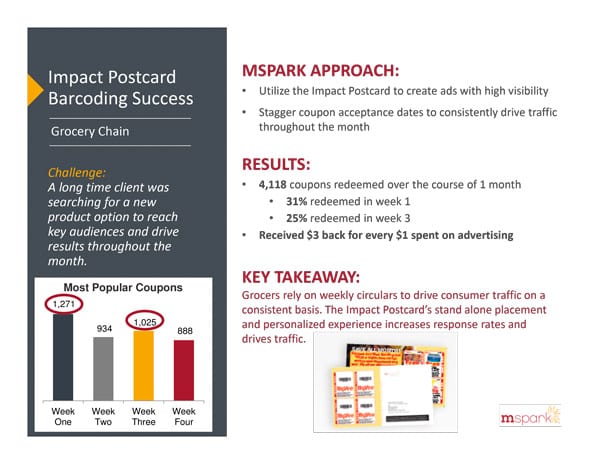 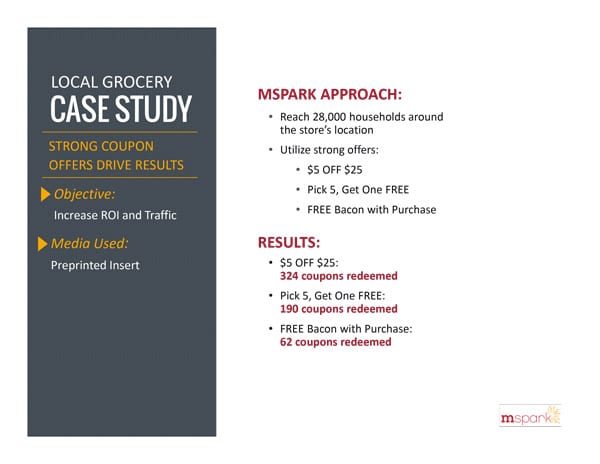 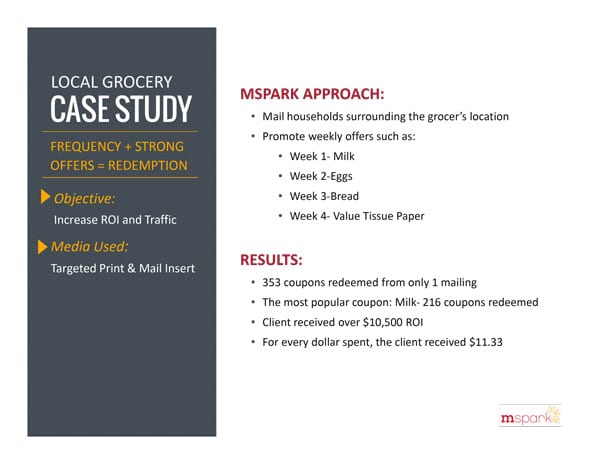 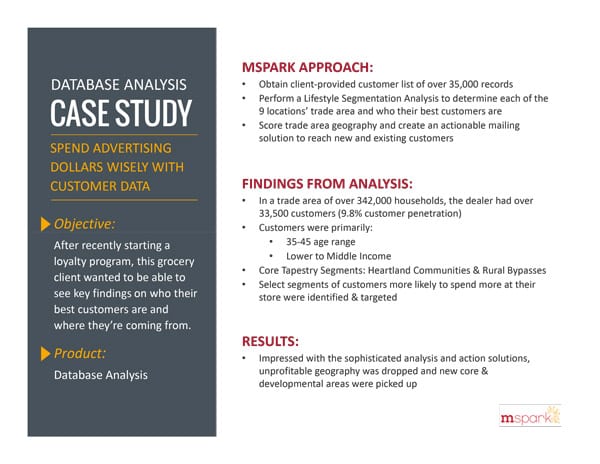