In the wake of the 2017 Equifax breach, the Federal Trade Commission has advised everyone to file taxes early, stating, “File as soon as you have the tax information you need, before a scammer can. Tax identity theft happens when someone uses your Social Security number to get a tax refund or a job. Respond right away to letters from the IRS.”
For tax preparation service providers, this is an important message to deliver to the public. Unfortunately, when it comes to data breaches that gain publicity, people tend to forget about the incident after a while. By the time tax season rolls around, many will be focused more on getting taxes filed by the deadline, versus filing their return early to prevent an identity thief from filing their return instead.
Direct mail is a great way to remind your rural audience of the important message from the FTC about filing early, and creating a strong call to action to do so. In fact, adults in rural areas are more likely to use a tax preparation service than their urban counterparts.

– Adults in rural areas are 16% more likely than their urban counterparts to use a tax preparation service to file their taxes this year.
– Rural residents are early filers, 35% more likely to file in January than their urban counterparts – so reach them early.
– Rural men and women are equally likely to use tax preparation services and this audience is mostly made up of baby boomers, with 22% between the ages of 55-64 and 26% over 65. 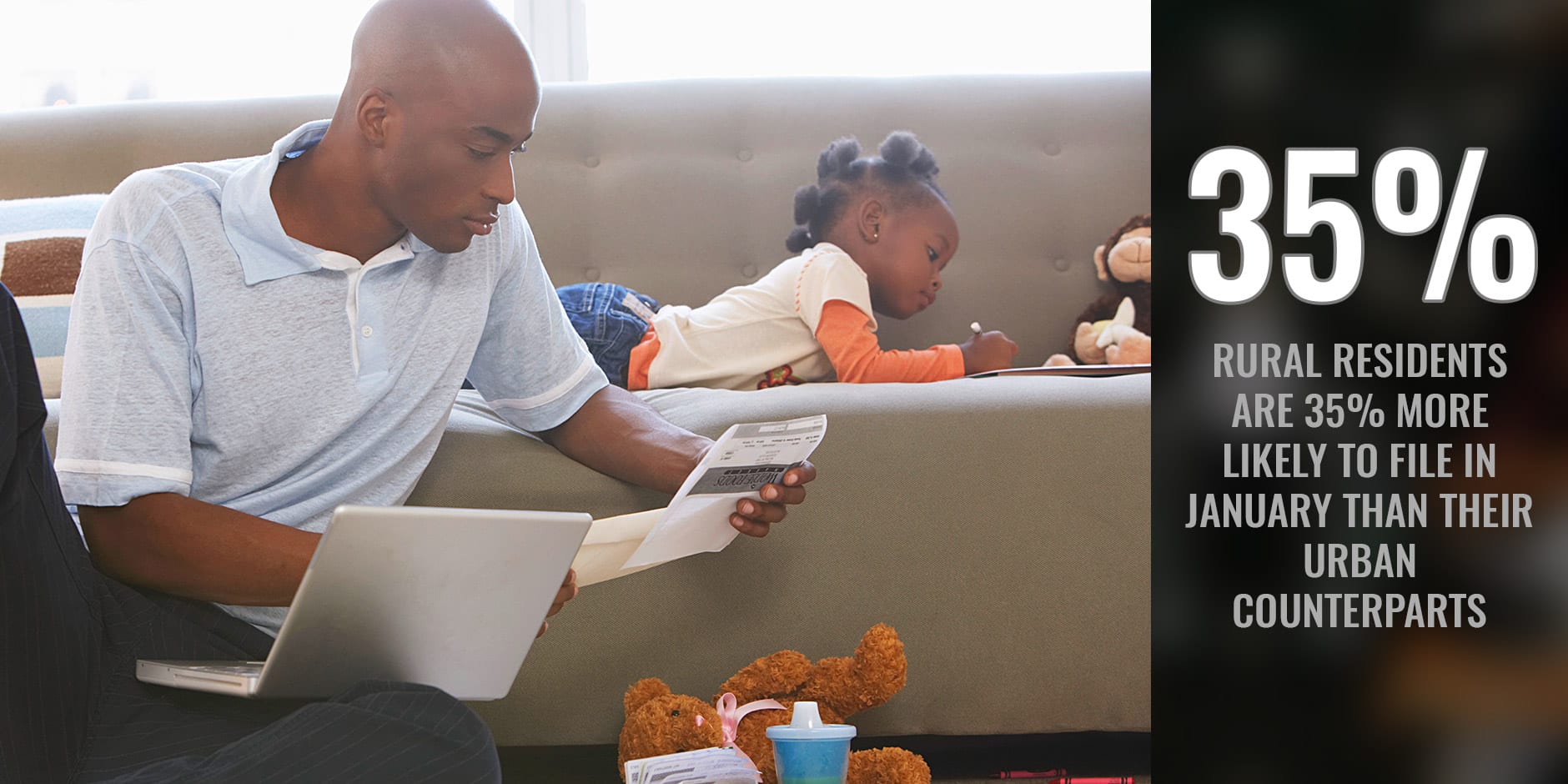 When Are People Filing?

For consumers in both rural and urban counties, most planned to file in February last year. In fact, February and March were the two big months they planned to file. But for people in rural counties, there was more of an eagerness to file early in January, 35% more rural residents claiming they planned to file early, compared to urban counterparts. About 65% of these rural residents were expecting a refund, which they planned to put towards savings or to pay down debt. People in rural counties have more of a tendency to use a tax preparation service. In fact, 16% more claimed they would be using one, compared to their urban counterparts. This means that for a tax preparation service provider like H&R Block or even a local accountant, rural residents might be more receptive to messaging that encourages them to file early with their local office.

Those interested in reaching rural tax filers should consider beginning campaigns early. Direct mail is undeniably a great choice for precision targeting. According to the DMA, direct mail response rates are on the rise. Last year average response rates were at 5.3% – a 43% increase from the previous year and the best it’s been in the last 13 years. This is likely due to better targeting with better quality data being used by marketers in their campaigns.
For anyone curious how 5.3% stacks up to other media, this is 1175% higher than social media, 750% higher than paid search, and 750% higher than email. This is not to say businesses should choose one medium and stick with it. On the contrary, when more than one medium is used, it further amplifies the message. This may, in fact, be necessary when the goal is to get more people in the door to file as early as possible – something most people are not used to doing, even rural residents who are more likely to file in January but most file later.
Tax preparation services have a great opportunity to reach this group to not only help them get their refund faster but also help prevent fraudulent tax returns from impacting their customers.
Interested in learning more about how we can help you deliver the message about the importance of filing early to your current and potential customers? Fill out the form to get started today!
GROW YOUR TAX PREP BUSINESS