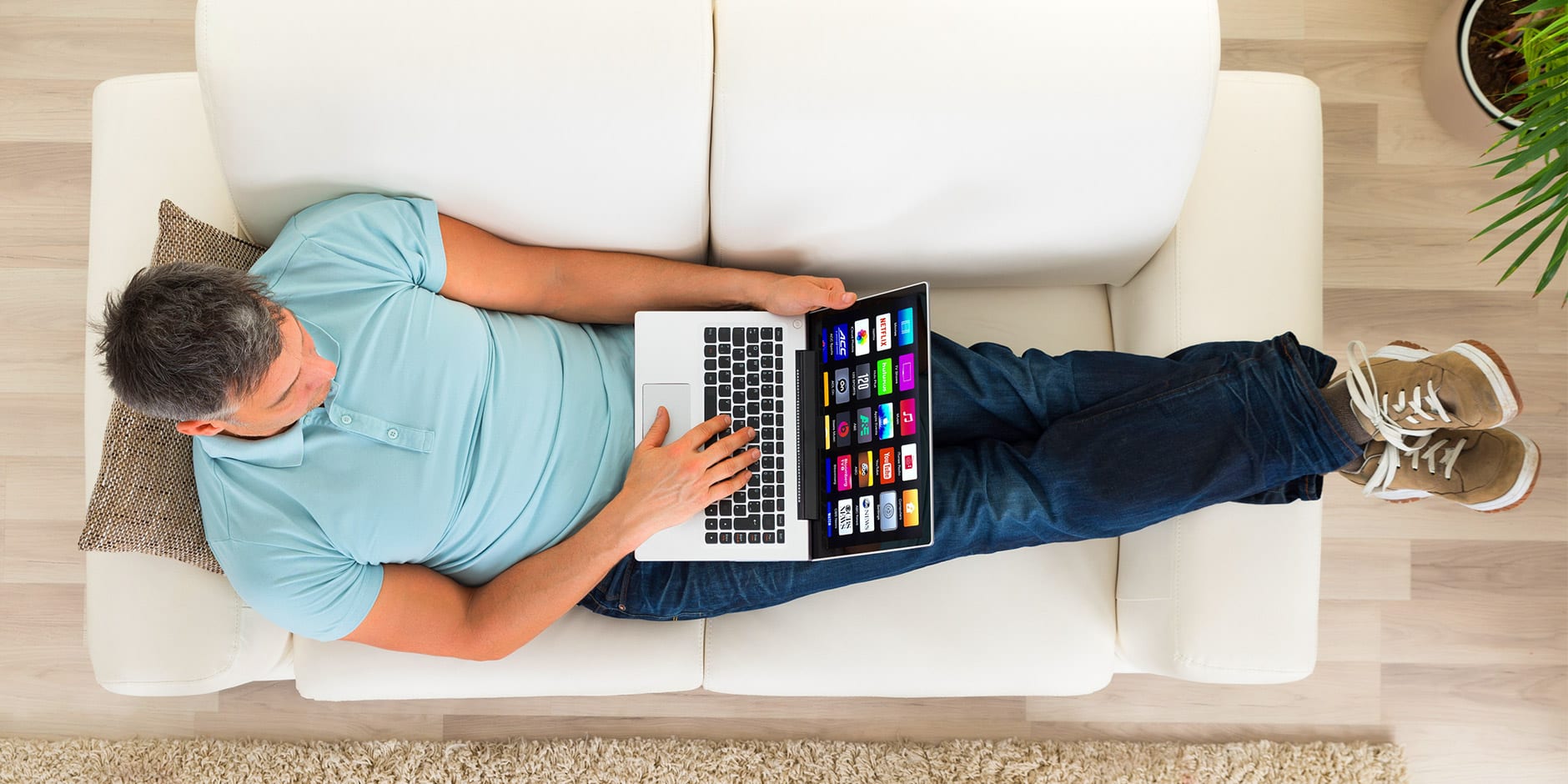 The Pay TV industry does not look at all like it did before 2007. That was the year Netflix, which was then a DVD movie rental by mail service, began their online movie streaming service. The first years of their streaming service were a bit bumpy. Netflix watchers couldn’t understand why there were not as many new and popular movies available for streaming and some questioned the direction Netflix was taking to remain relevant with consumers.
Then something changed.
2012 became the year of the cord-cutter. People were coming out of the economic recession with a totally different consumer mindset – that of minimalism. Why pay for channels rarely watched? Why not find a way to pay less for TV and use the money saved for paying down debt or adding to savings? Netflix and other low-cost streaming services made cord-cutting tolerable for the masses. And in 2013, Netflix began producing its own originals, and has been growing their library ever since. The era of Netflix “binge-watching” began.

Brian Solis is a digital analyst, speaker, and author of several books on digital marketing, changing business models, customer experience, and brand innovation. He’s well-known for speaking and writing about “Digital Darwinism”, which is the phenomenon when technology and society evolve faster than an organization can adapt. Examples of Digital Darwinism would include former businesses such as Blockbuster Video or Tower Records who failed to adapt in time to respond to digital disruption in their industries. No industry is safe from Digital Darwinism and companies need to prepare to adapt quickly or otherwise face the consequences.
This is precisely what is happening with Pay TV. In the graph below, Pay TV subscriber growth has been in steady decline since 2006 and starting around 2012, Pay TV subscriber loss is the new normal. Even with Over-the-top (OTT) streaming services like Netflix and DirecTV NOW factored in, growth is still in the negative. Which would make a lot of sense considering one survey found that 46 percent of adults in the U.S. have shared streaming service logins with people living outside of their homes. 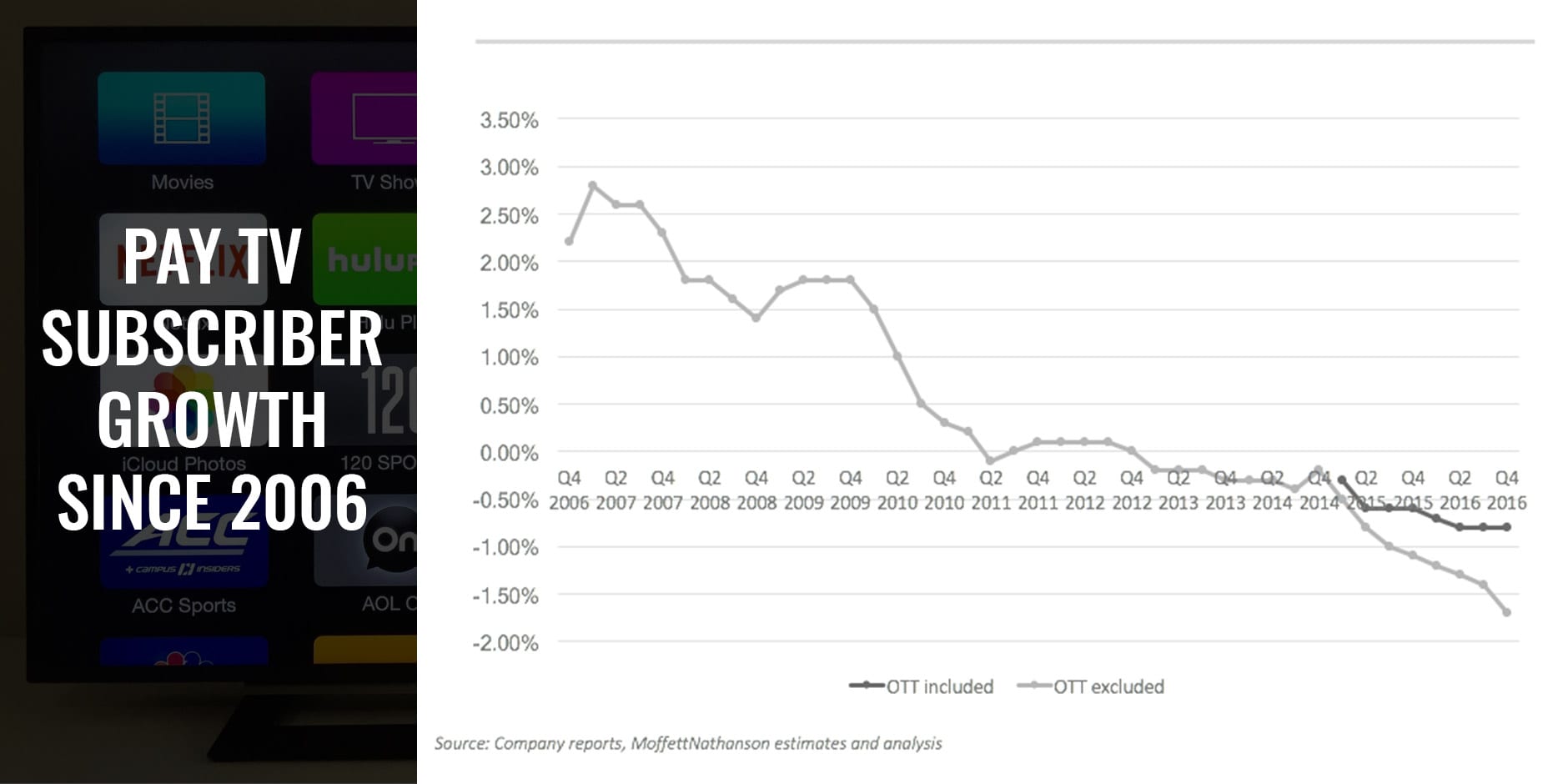 It is clear the Pay TV industry has quite lot of adapting to do if it wishes to remain relevant. For cable providers, that might mean moving all new and existing customers to a full digital experience. Another way they are adapting, probably reluctantly, is by attracting cost-conscious consumers with basic or “skinny” bundles – which are digital packages that include fewer channels for a lower cost per month. For satellite companies, it means evolving their OTT services like DirecTV NOW and Sling Television. And for OTT providers it might mean continuing to provide binge-worthy original shows and perhaps tightening up their login access policies. In all circumstances, the message is the same – the consumer is calling the shots now and companies have a choice – adapt or fall. 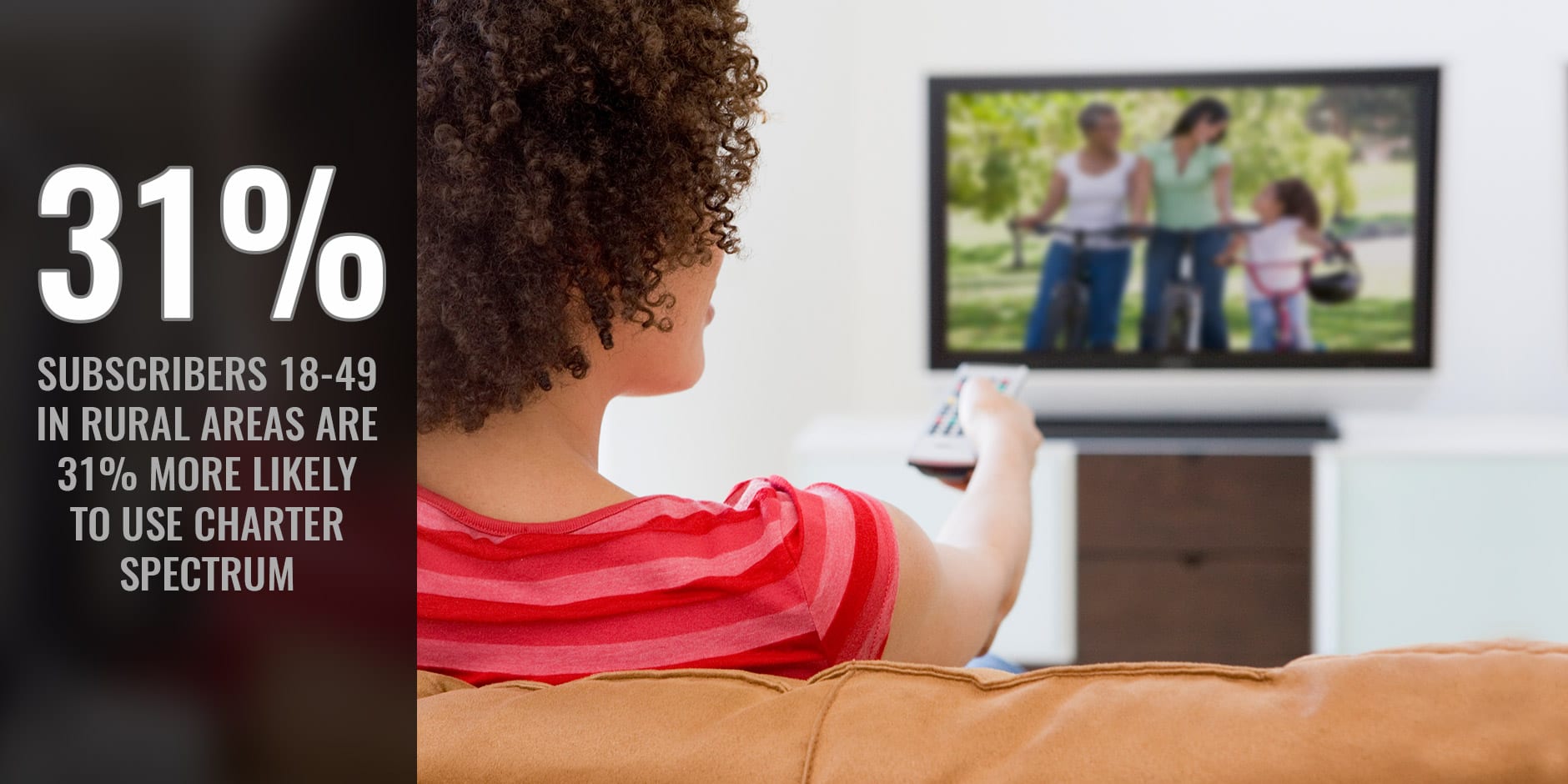 Rural Pay TV consumers have traditionally been satellite consumers with those ages 18-49 32% more likely to have a satellite dish, compared to all adults. This, however, is changing with satellite declining more than 17% in rural areas in only two years.
Something interesting is happening with subscribers 18-49 in rural areas – they are very likely to be using a variety of OTT services and, while not particularly known as cable subscribers, are 31% more likely to use Charter Spectrum. Could it be that rural residents want something new and different? Or maybe when companies invest in providing choice to consumers who’ve historically had little choice, great things happen. And when those companies select the right kinds of media to reach consumers, their competitors miss out.
Mark Cuban, Shark Tank star, owner of the Dallas Mavericks and Chairman of HDNet once said: “To be successful in business, you need to see what others don’t.”
How is it that one cable company managed to have so much success in rural America? Could it be that they saw something others didn’t?

Digital Darwinism isn’t always black and white. Disruption is not always a destructive force seeking out “antiquated” businesses to ruin. Remember when everyone assumed email would bring an end to the postal service? It certainly was a semi-logical assumption, especially when offers and utility bills starting going paperless and ending up in email inboxes. But somehow the rusty old mailbox survived and, not only survived, it became many people’s happy place filled with nifty subscription boxes, goodies from Amazon, and fewer bills. 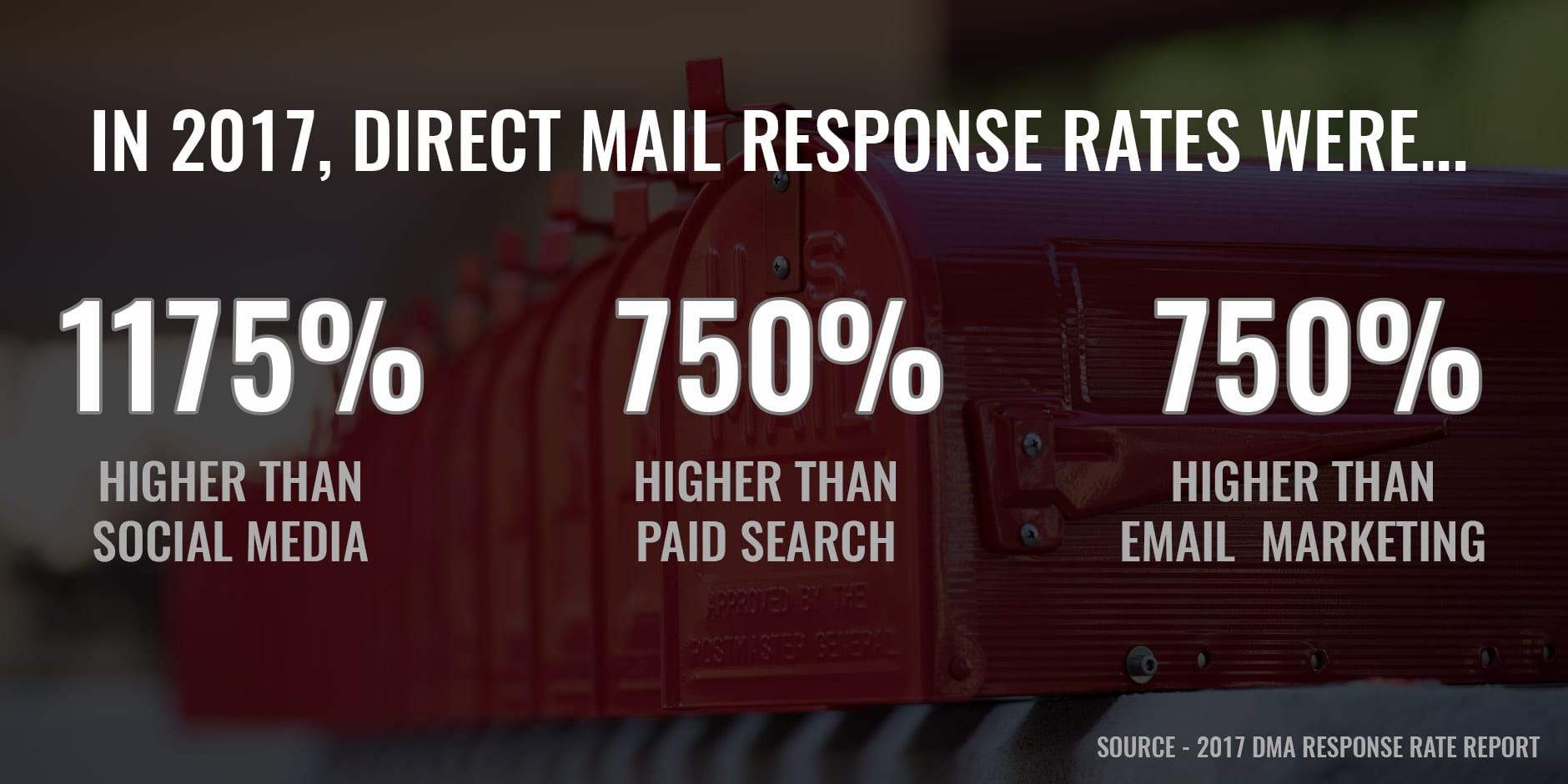 Today in the world of marketing, we’re dealing with similar faulty assumptions but this time it’s about direct mail. Some marketers think that it’s going away. It’s antiquated… a victim of Digital Darwinism like the newspaper industry. Some of what they believe is true – not all direct mail companies have been able to remain afloat in recent years and some marketers have had a harder time using direct mail to run successful campaigns. Those things are all true – but peel the onion back a few layers and something important surfaces. Direct mail is not a victim of Digital Darwinism – not even close.
This year the DMA released their annual response rate report. In that report, it showed direct mail response rates were 1175% higher than social media, 750% higher than paid search, and 750% higher than email. In fact, direct mail has seen an incredible increase in response rates over the last two years, improving by 43%. That’s huge!
Numbers like that can be attributed to a few things but there are two that should really be kept in mind.

Data Driven Targeting Is the Key to Results

First, don’t assume too much about the media type. It’s about using quality data to make smarter, more insight-driven decisions when it comes to message and targeting. That is what drives higher response. If the medium chosen cannot support an insight-driven message and precision targeting strategy – or if “spray-and-pray” is the strategy, something is wrong. While direct mail clearly has higher response rates than digital media, it’s helpful to remember that both print and digital work very well together to achieve desired response.
Second, marketing hackers exist. Just like computer hackers exist – white-hat, black-hat, and everything in between. These marketing hackers, responsible for impressive direct mail response rates, have used a medium many people assumed was dead or dying in a whole new way and the results speak for themselves. Hackers see what others don’t.
When it comes to the Pay TV industry, rural consumers, and marketing media, not everything is as it seems. Sometimes it’s just helpful to look at what the data is telling us and go from there. Sometimes it makes sense to search for the things that are commonly overlooked or misrepresented. In the face of Digital Darwinism, finding hacks and going against prevailing assumptions might just be what it takes to effectively reach your audience.