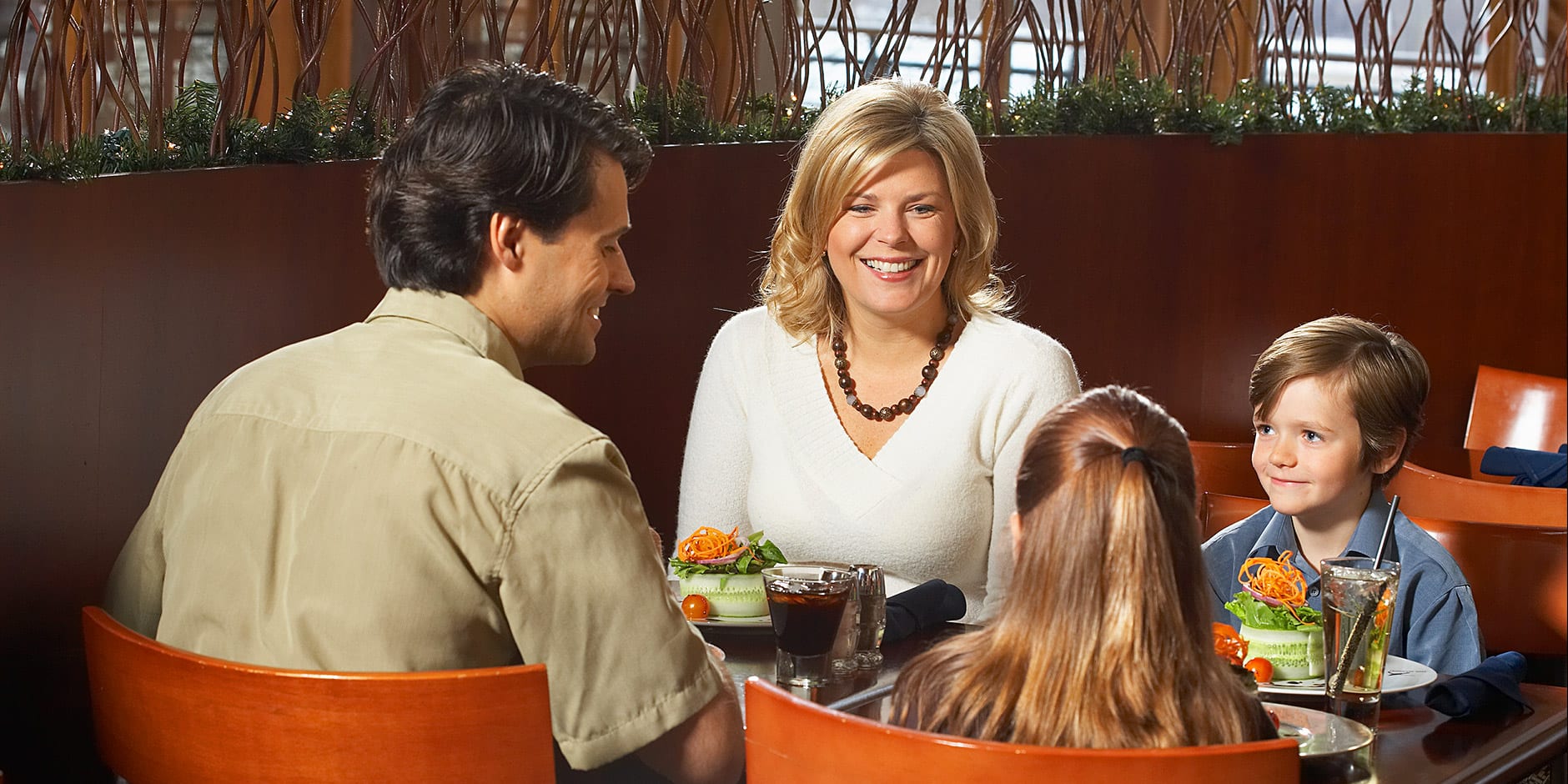 With our current low unemployment and increasing consumer confidence, the economy would seem to be raining down sunshine for restaurant businesses everywhere. The logical assumption would be: more money in people’s pockets + more fried mozzarella cheese stick appetizers for everyone = more revenue for casual dining chains. But for many casual dining chains, the recovery from the Great Recession hasn’t exactly played out that way. Instead, the already crowded restaurant industry has become even more saturated with fast-casual restaurants and new independent establishments opening everywhere. Consumer preference has shifted away from fried cheese towards cleaner, leaner, healthier options. Or at least if it’s not healthy, it’s lower-priced, faster, tip-free dining at their local fast-casual establishment.
Whatever the case may be, the pressures on casual dining chains are having an impact on revenue growth. Foot traffic is down, sales are not impressive. When you think about it – that’s disappointing when you consider that people are now feeling confident enough with the state of the economy to spend a little extra on food away from home. How much opportunity is being missed here? If casual dining chains really want to increase foot traffic, what, if anything, can be done to achieve this to ensure opportunity isn’t missed? 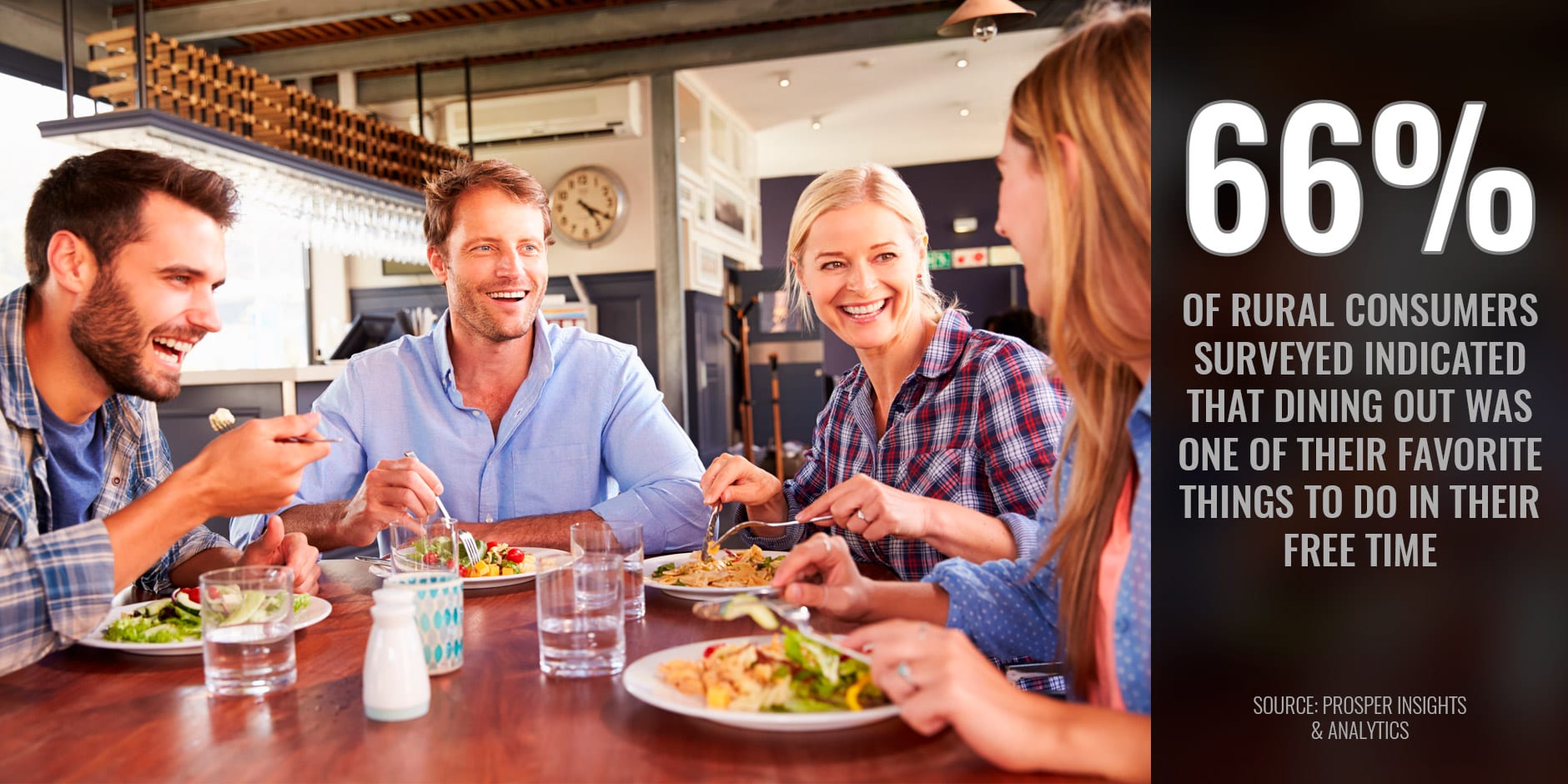 According to Prosper Insights & Analytics, 66% of rural consumers surveyed indicated that dining out was one of their favorite things to do in their free time – the same percentage as their urban counterparts. They dine out about as often as their urban counterparts, about 2.5 times per month and spend about $30.92 on average per visit, about $2.58 less than restaurant goers in urban areas. Not surprising given rural consumers’ thrifty nature as well as overall expenses being lower in rural geographies versus urban.
Ok, so big deal, right? They dine out just as often, and spend less…why are we talking about rural consumers again? Well, because no one else really is. Rural consumers often get characterized as being lower-income, grayer, penny-pinching, retired blue collar workers who aren’t exactly an ideal target market. And yes, there is some truth in a few of those generalizations – rural consumers earn less than their urban counterparts, they are older, and thriftier. But there’s also truth in the fact that they’ve got to eat, they don’t always like to cook for themselves, and most have plenty of time and extra cash on hand for some loaded potato skins and a steak at their favorite restaurant. They are certainly not a group to be overlooked, and if sit-down chain restaurants want more traffic and want more of a competitive edge, they’d investigate ways to appeal to rural consumers and invite more of them to dine more often.
We can see in the chart below that restaurant customers in rural areas certainly have their preferences. 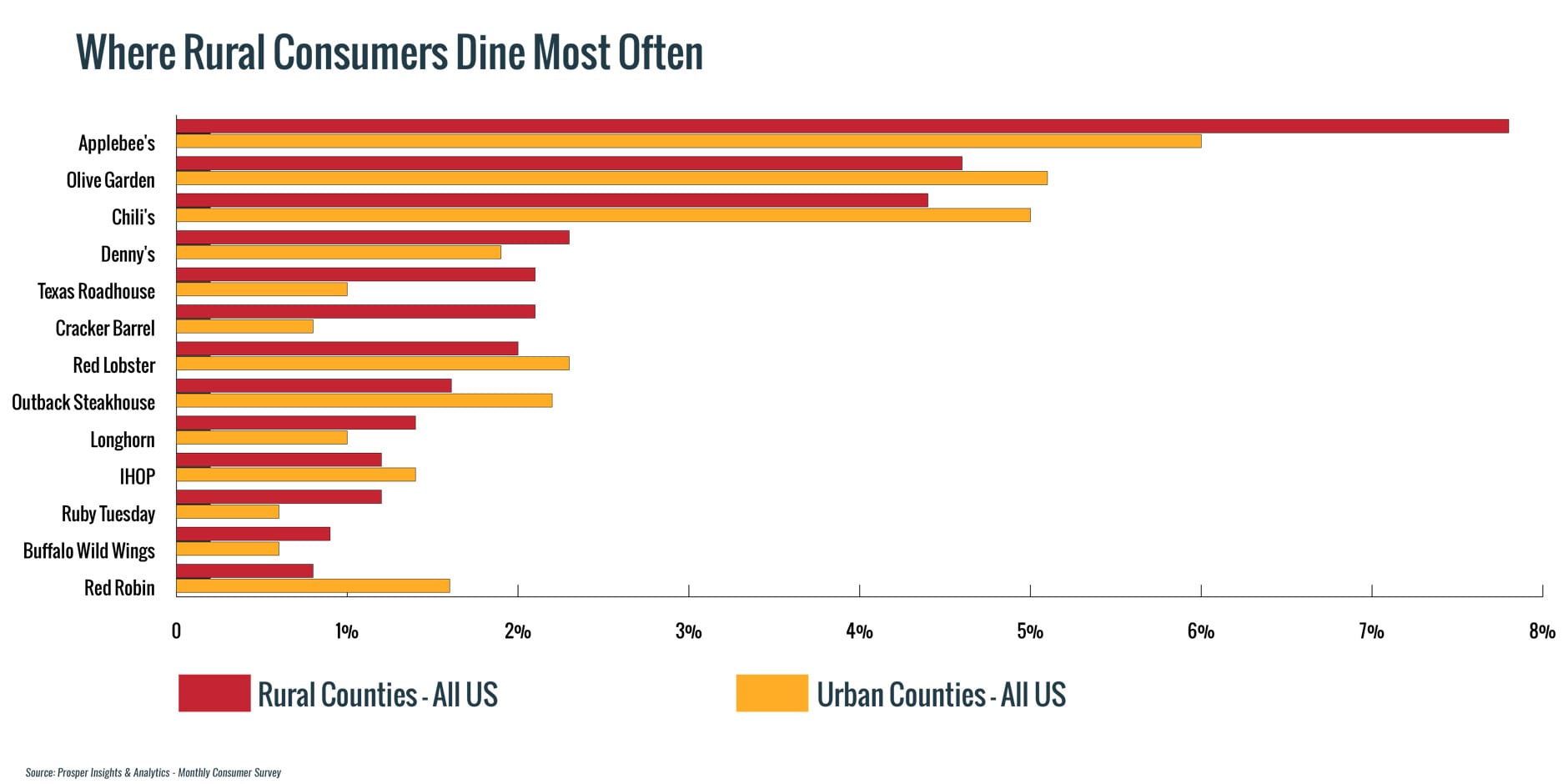 Coupons Bring Customers to Your Restaurant

But why would a rural consumer choose Longhorn over B Dubs? Both are great places to take the kids. Both have delicious items on their menus. If we look at this chart below, we see there is one area where Longhorn wins big in the minds of rural consumers – e coupons/special offers. 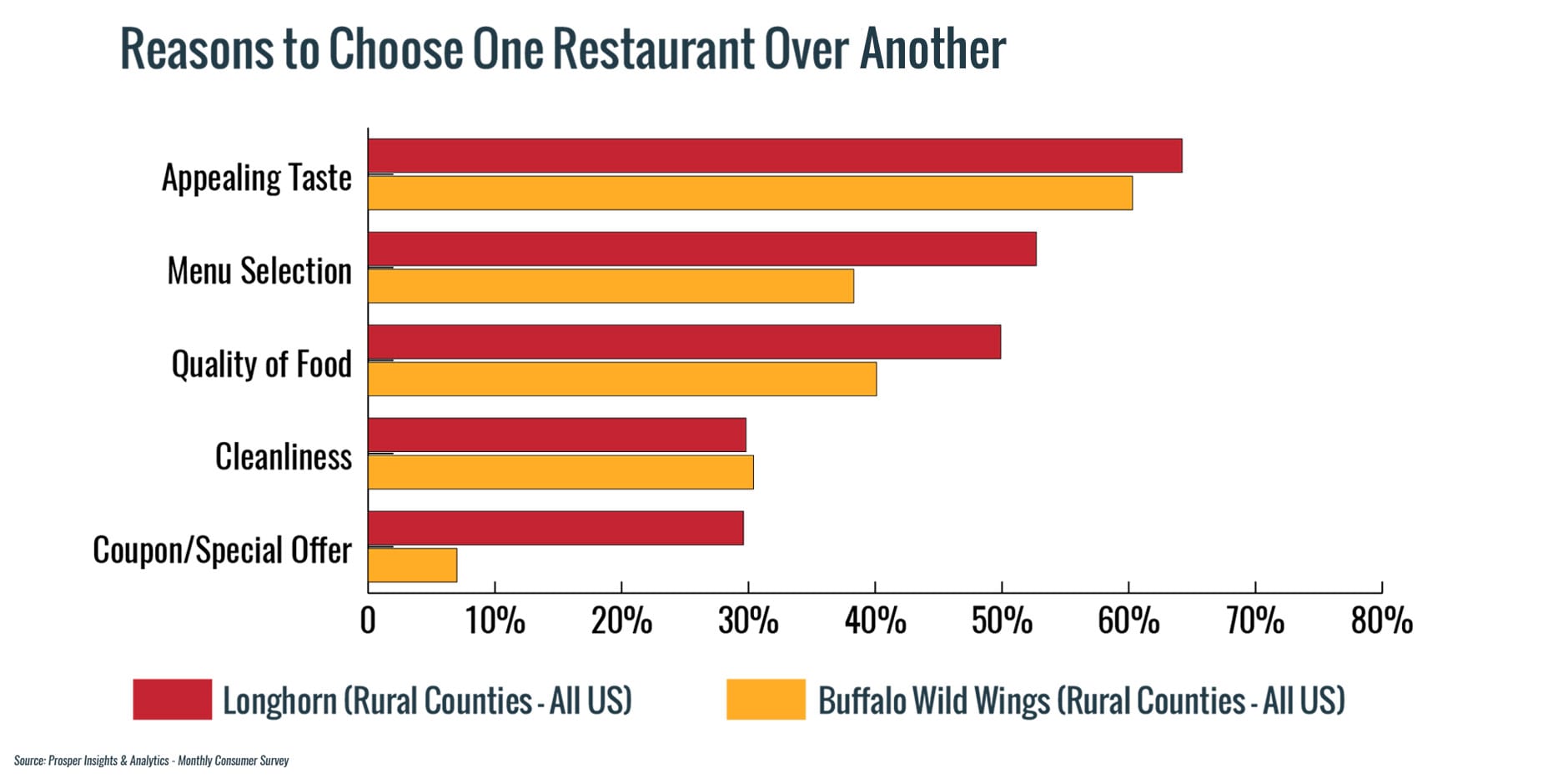 This could be a clue that rural consumers should not only not be overlooked…but that restaurants could gain a competitive edge with coupons. Here are some more stats that show just how much influence coupons have over rural consumers:

Coupons influence rural consumers’ decisions to dine out…but what’s the best way to deliver them? For that answer, we turn to the DMA’s latest statistics on response rates by selected media. 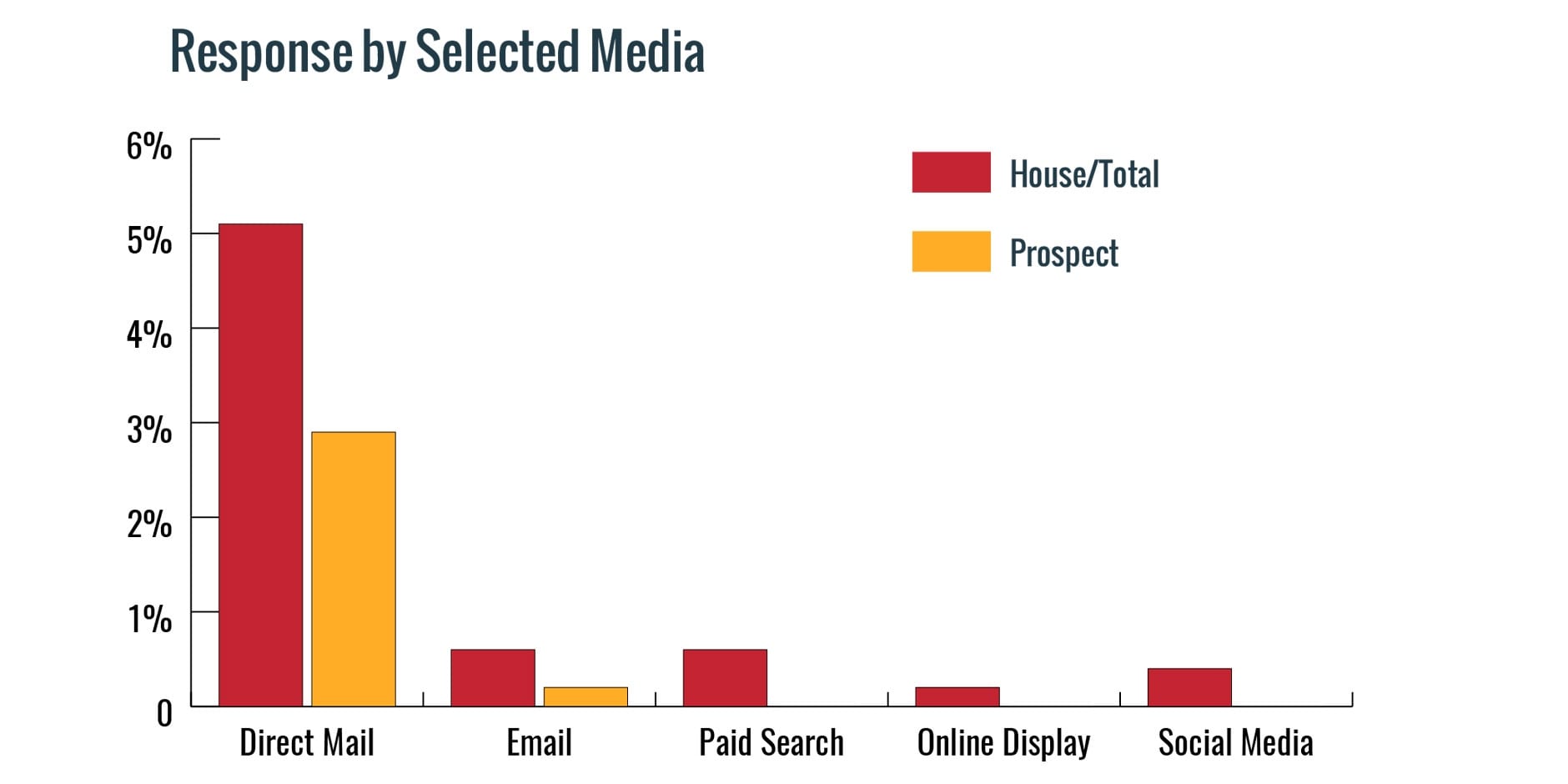 Clearly, direct mail is a winner when it comes to response rates, but we want to be clear on what exactly we are recommending here. While we can see value in using just one medium to reach your target audience, real and sustained success lies in taking a holistic approach where high-response media is working together to reach the right people and achieve the intended goals.
We have a long history of helping our customers increase foot traffic with direct mail. Download the casual dining case studies below for detailed direct mail campaign results. 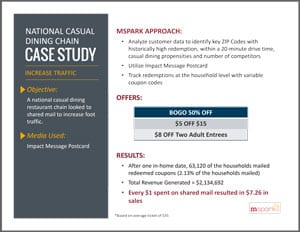 If you find yourself curious about marketing strategies to increase foot traffic to your restaurants, feel free to reach out to us. We’d be delighted to give you that competitive edge and make sure you are getting your share of wallet from rural restaurant diners. Fill out the form to get started today! GROW YOUR BUSINESS